There are currently great opportunities to use nitrogen (N) in extensive pasture systems to fill feed deficits and produce additional fodder surpluses in spring. Nitrogen fertiliser is most effective in grazing systems when the pasture is actively growing, there is good soil moisture and the feed can be conserved or utilised.

The key to effective nitrogen applications in pastures is forward planning. It’s no good thinking “I’m short of feed, I’d better put some nitrogen on” because the conditions might not be right for generating additional growth right now – and even if they are, the growth response might be a month or six weeks away. Gaps in pasture growth and periods of high demand for feed like calving or lambing are generally predictable, allowing graziers and their advisers to plan ahead so the feed is in the paddock when it is needed.

Although it is difficult to pinpoint exactly what the response to nitrogen fertiliser will be for any given situation, there are some simple rules for best results.

Firstly, the pasture must be actively growing and able to benefit from the additional nitrogen. If pasture growth has stopped due to waterlogging, cold winter temperatures or dry conditions, applying nitrogen will not be effective.

The paddock needs to have more than 50 mm of stored soil moisture at the time of application to provide a significant dry matter (DM) response. A minimum of 5-10 mm of rainfall or irrigation is required to effectively move applied nitrogen fertiliser into the soil and minimise volatilisation losses.

While winter is considered to be a period of slow pasture growth, nitrogen responses can be excellent at this time of year and pasture utilisation is typically high.

Graziers who used nitrogen in the winter of 2015, for example, when there was good soil moisture achieved better results than those who waited until spring, when soil moisture levels had decreased. Sometimes it’s a good idea to take advantage of soil moisture and good growing conditions when they are available, because we don’t know what will be around the corner.

Soil fertility, sward density, weed management and insect management are all important to ensuring the pasture can make the most of any nitrogen applied. In grass pastures with a legume base, phosphorus, potassium, sulphur and molybdenum are the main nutrient considerations. Soil acidity and associated aluminium toxicity or sodic soils are potential limitations to root development and exploration which could limit production and nitrogen responses.

Nitrogen should be applied immediately post grazing. Nitrogen responses decrease by 1% for every day the application is delayed, i.e. delaying nitrogen application for 10 days after the sheep or cattle come out of the paddock will reduce the potential nitrogen response by 10%.

We know that nitrogen applications will not carry over to the next grazing rotation – it’s a case of use it or lose it. That’s one of the reasons why grazing management is critical to obtaining the best value from nitrogen. Nitrogen should only be applied when the additional pasture growth can be consumed.

Grazing before the three-leaf growth stage in ryegrass will restrict the total potential dry matter which can be generated from the nitrogen application. Grazing early may also mean the leaves have an elevated nitrate level, with potential for animal health issues. 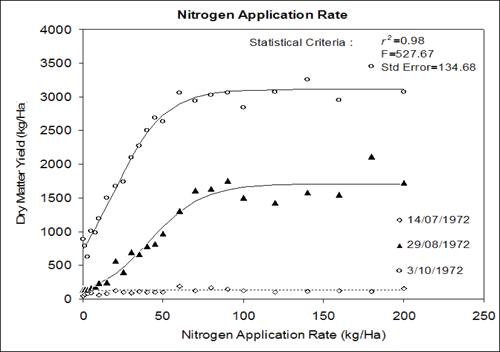 There are exceptions to this maximum rate rule, but the laws of diminishing returns start to apply after 80 kg/ha of nitrogen. There may be scope to increase rates to 80 kg/ha of nitrogen where graziers are looking to drive the system harder. They would need to have good base soil fertility, no weeds, pests or diseases, an excellent growing season with good soil moisture, good grazing management and a pasture cultivar which can take advantage of the additional nitrogen. The previous rotation may also have an impact, for example where there has been a big silage cut removing a lot of nitrogen from the system. The decision should also take into account the relative cost of nitrogen, the likely dry matter produced and the cost of alternative fodder sources.

The overall success of a nitrogen program can be measured by comparing the cost of this additional dry matter produced with the cost of sourcing a similar quality supplementary feed.

For example, if a 10 kgDM/kg N response was generated from a 40 kg/ha nitrogen application, the additional dry matter produced would be 400 kgDM/ha. At 70% utilisation, 280 kgDM/ha is consumed. If nitrogen costs $1.30/kg, the value of the additional utilised feed is $186/t of dry matter.

Another option for assessing the potential value of a nitrogen application is the Dairy Nitrogen Fertiliser Advisor online tool, available from Agriculture Victoria. This allows graziers and advisers to adjust parameters including location, season, pre and post grazing mass, cost of alternative feed and cost of nitrogen, and see the likely results to guide decision making.

It is essential to understand the seasonal growth habits of particular varieties and cultivars before applying nitrogen. Incitec Pivot Fertilisers conducted collaborative nitrogen trials with PGG Wrightson Seeds at Ballarat between 2014 and 2017 using a range of perennial ryegrass cultivars to measure seasonal responses to nitrogen. For example, the spring growth peaks were earlier and larger for Victorian ryegrass, while Base AR37 gave greater dry matter responses to nitrogen in autumn and winter at all nitrogen rates (See Figure 2).

For more information on achieving good results from nitrogen in pastures, feel free to contact me on 0412 565 176 or lee.menhenett@incitecpivot.com.au.