Nitrogen for grain and graze crops

In reviewing the results from our nitrogen trial in a grain and graze system at Millvale in New South Wales, it is clear these crops need special treatment to perform to their best.

Ideally, they need high rates of nitrogen up front to support dry matter production, plus a second or third application in crop to provide enough nitrogen at the right times for a successful grain harvest.

IPF’s small plot replicated trial compared a range of nitrogen rates, products, application timings and placements in Wedgetail wheat. It was conducted with the cooperation of Lachlan Caldwell and managed by Kaylx.

Wheat was planted dry into canola stubble on 27 May 2016, with 20 mm of rain recorded four days later. The rain continued to fall for the rest of the season, with rainfall totals much higher than the average in June, July and September and October.

Nitrogen soil testing by the Nutrient Advantage laboratory in July showed 85 kg/ha of nitrogen in the 0-60 cm zone.

Although there were many treatments, there were only a few areas which resulted in significant increases in dry matter yield, grain yield or protein.

The only treatments to achieve grain protein levels above 10.4% were some of the split applications.

Some treatments were topdressed twice, as well as receiving nitrogen fertiliser banded below the seed, and these also achieved good grain protein levels of 10.7% or above. 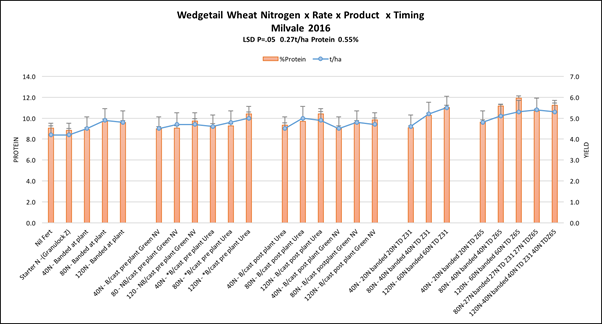 In terms of grazing potential, the crop appeared to do best with higher rates of nitrogen at planting.

These were 120 kg/ha of nitrogen broadcast and incorporated pre-plant and urea or Green Urea NV broadcast post-plant at 120 kg/ha.

We also assessed the dry matter yield at 93 and 175 days after sowing, but there were no further significant differences recorded.

In this trial, there were no significant yield improvements from using Green Urea NV rather than urea when used at the same application time and rate. This result was expected when 20 mm of rain fell 4 days after application.

Green Urea NV provides some protection from volatilisation losses if timely follow up rainfall does not occur to move the nitrogen safely into the soil after application.

Given the wet season, urea may not have been subject to significant volatilisation loss potential.

A follow-up grain and graze nitrogen response trial has been planted for 2017 at Tubble in a crop of the newly released Kittyhawk grazing wheat.

For more information or the full trial report, please call me on 0427 006 047 or email jim.laycock@incitecpivot.com.au.