Do canola varieties need the same amount of sulphur?

It has long been noted that canola needs sulphur, but with 49 canola varieties available and more on the way this year, the question is do they all need the same amount of sulphur?

An interesting experience at Incitec Pivot Fertilisers’ long-term trial site at Grenfell in 2017 suggests that some canola crops may be hungrier for sulphur than we think.

The Grenfell long-term experiment commenced in 2007 to assess various nitrogen x phosphorus rates in winter crops. Crops are grown in rotation, with canola sown in 2012, 2014 and 2017.

Sulphur has been applied twice during the life of the trial, as broadcast gypsum in 2009, supplying 80 kg/ha of sulphur and banded potassium sulphate in 2012 supplying 36 kg/ha of sulphur. Triple super and urea are used to supply phosphorus and nitrogen.

The results from soil testing pre-sowing in 2017 showed low sulphur values in the 0-10 cm range, with an average of 3 kg/ha KCL40 extractable sulphur over 24 plots.

In the 0-60 cm soil test, the results averaged 34 kg/ha of KCL40 sulphur. This was marginally above the critical value of 31 kg/ha extractable KCL40 sulphur, based on the Better Fertiliser Decisions for Cropping database for canola in New South Wales.

In the two canola crops previously grown on the site, sulphur deficiency symptoms had not been observed. Previous grain nutrient testing in canola at this site had not identified any grain sulphur levels below the critical value for grain sulphur of <0.36% (Hocking).

The decision was made to plant without an application of sulphur, knowing that the crop would be monitored, tissue testing could be used for positive identification and the crop could be treated effectively with a topdress of GranAm® fertiliser.

At a site inspection on 16 June, sulphur deficiency symptoms were observed in all plots. The younger leaves were lime green, with interveinal chlorotic mottles. The leaves were cupped with purple margins. 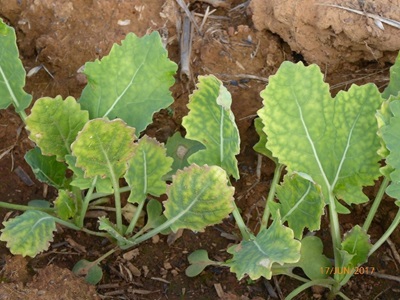 
These symptoms can sometimes be confused with manganese toxicity, which has been seen in canola on similar soil types in the district.

The symptoms of manganese toxicity are smaller yellowish plants and a yellowing of the leaf margins that progresses inwards generally between leaf veins with some mottles. The leaves on more severely affected plants cup inwards and die from the margins. 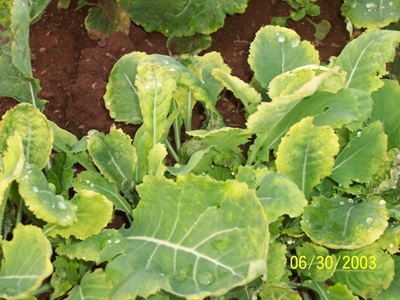 
As per the plan at the start of the season, tissue testing was conducted. Tissue samples were taken on 18 June from four replicates of two treatments (20P60N and 40P60N).

A tissue sample was also taken from the co-operator’s surrounding canola crop for comparison. This crop had received 150 kg/ha of ammonium sulphur pre-plant and was not exhibiting any signs of sulphur deficiency. 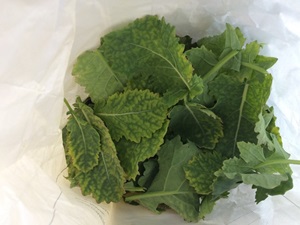 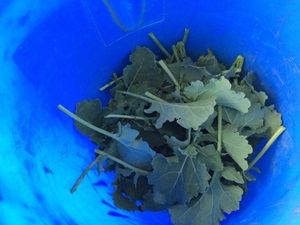 Tissue testing in crop. The YML (L3-L4) was sampled on 18 June 2017 from the trial site (left) and the surrounding canola crop (right).

The surrounding canola crop, where no symptoms were evident, returned results of 0.75%.

Manganese leaf tissue levels from the trial were in the range of 130 to 160 mg/kg, below the level of 400 mg/kg where toxicity symptoms appear (Moroni et. al) and less than the 3650 mg/kg toxic range (Weir and Creswell).

Considering the deep soil results from this site in Grenfell, I would have expected the canola to be able to access enough sulphur from the profile later in the season as the roots developed, assuming reasonable growing conditions.

But while it might have grown out of it, I wasn’t prepared to take the risk and potentially compromise the results of the long-term phosphorus and nitrogen trial.

Based on the disparity between the ‘good’ and ‘bad’ dried tissue sulphur levels and the satisfactory manganese levels, the decision was made to apply 150 kg/ha of GranAm, supplying 30 kg/ha of nitrogen and 36 kg/ha of sulphur, to all plots on 26 June 2017. 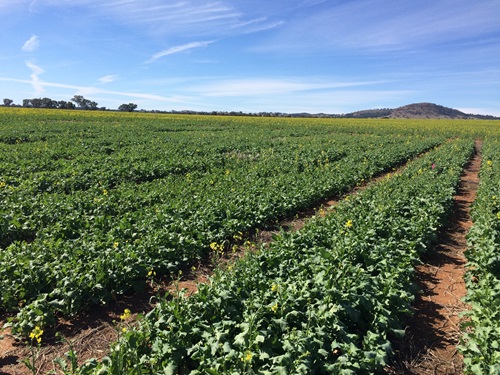 Canola later in the season at Grenfell, following 150 kg/ha of GranAm. Did the crop need sulphur or were soil reserves going to be enough? No comparison can be made, as all plots were treated.

With 49 canola varieties available in 2022 and more on the way this year, testing of 84 canola genotypes found the genotypic variation in growth and nitrogen or sulphur efficiency in canola germplasm was significant (Balint et al 2008).


This means there is a chance that a canola variety you are growing or managing this season may have poor sulphur use efficiency or be less efficient at accessing soil sulphur.

This should be taken into consideration when assessing the results of soil and plant tissue testing.

This season, if you see symptoms similar to these in canola crops, sample early so you can positively identify the deficiency or toxicity and manage accordingly.


Collect all the information and then make the decision.

Just remember, as we saw in the trial last year, not every situation is clear cut and advisers need to use all the tools available when assessing the need for sulphur.

The best recommendations are those which take into account the grower’s objectives and risk:reward profile, along with good reliable data from soil and tissue testing.

For more information or to discuss sulfur further, feel free to give me a call on 0427 006 047 or send me an email at jim.laycock@incitecpivot.com.au.

Gran-Am Losing yield? Hold on to your nitrogen...