Managing fertiliser application with the seed

The last thing we want to do when applying fertiliser at planting is to delay or reduce emergence. When fertilisers are placed with the seed, the potential for seed damage is always present.

Successful crop establishment depends on a complex interaction of factors classified into five broad categories - fertiliser characteristics, crop type, soil moisture, soil type and application equipment. When there has been a change to any of these factors take the time to calculate the SBU% and look up the safe rates tables before planting. See details below.

Damage can be caused by high levels of ammonia too close to the seed or a potential osmotic effect from the fertilisers. The biggest issues are usually seen where fertilisers containing nitrogen are used in the seed furrow, this includes fertilisers such as DAP or blends of urea and MAP. The hierarchy of risk from fertilisers is: BIG N > urea > DAP > MAP > GranAm®. The higher the rate of nitrogen applied with the seed the greater potential there is for poor crop establishment.

Fertilisers containing ammonium can cause metabolic damage during germination, root or shoot growth. Fertilisers such as urea, di-ammonium phosphate (DAP), mono-ammonium phosphate (MAP) and ammonium sulphate (Gran-Am) pose the greatest risk to a germinating seed because they produce a high ammonium concentration and have a high solution pH and high solubility. Applied at the same rate, DAP is more likely than MAP to reduce germination and restrict root growth through ammonia toxicity because of its higher potential to release free ammonia. 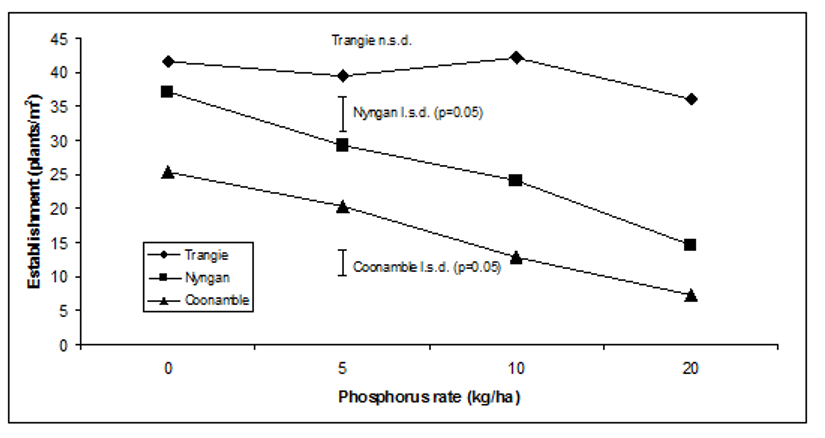 There have also some cases of ‘phosphorus toxicity’ with sensitive crops like canola and lupins. In a trial by the NSW DPI, increasing the phosphorus rate to 20 kg/ha of phosphorus at Nyngan and Coonamble significantly reduced the establishment of canola in 2015.2 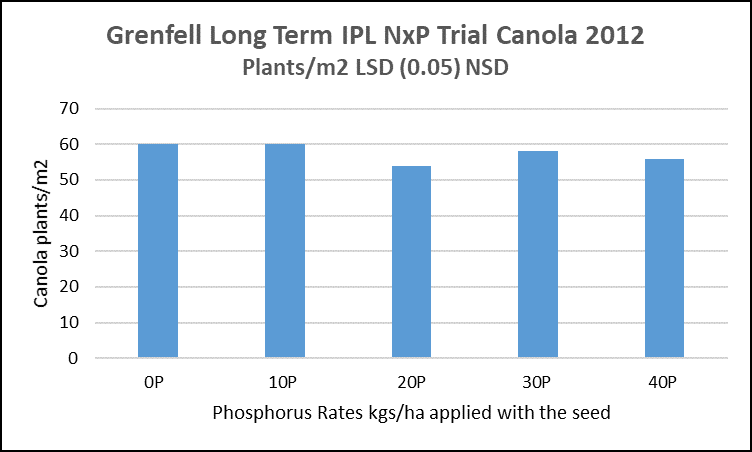 With canola at the Grenfell IPL Longterm Trial site in 2012 using different seeding equipment, different soil type and soil moisture there was no significant effect on crop establishment with phosphorus rates.

The application of starter fertiliser banded with the seed in southern New South Wales trials reduced lupin crop establishment numbers in two of the three years and there was a significant reduction in grain yield in the first year and no difference in 2012 and a significant increase in 2013.3

At the Incitec Pivot Fertilisers Long Term Nitrogen by Phosphorus trial site in 2010 based on the factorial analysis, crop plant counts, dry matter production, and yield (10% level) all decreased as rates of phosphorus increased up to 40kgs/ha applied with the seed4. 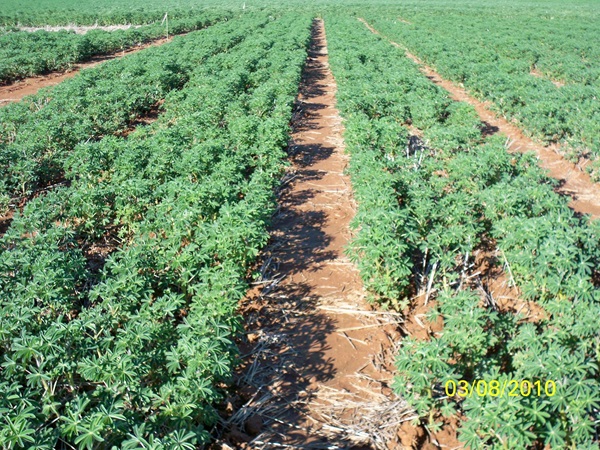 Photo 1: Albus lupins at Incitec Pivot Fertilisers’ Grenfell long term trial site in 2010. The nil P with the seed is the plot on the left, showing better establishment than the 10 kg/ha of phosphorus as triple superphosphate treatment in the plot on the right.

Crops vary in their tolerance to fertilisers, with oats, barley and wheat more tolerant than lupins and chickpeas. Canola is the most sensitive winter crop type.
The difference in tolerance between canola and wheat can be seen in these trays I prepared with urea applied with the seed simulating a 33cm row spacing with a seed furrow width of 25mm, 7.6% SBU. 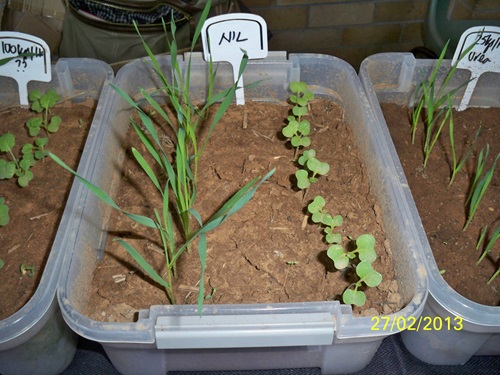 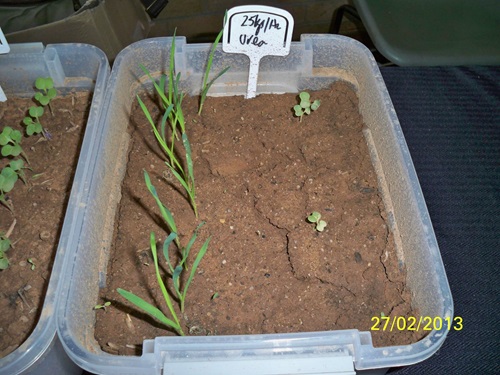 Photo 2: No fertiliser (left) was better than  25 kg/ha of urea (right) for the canola in this seed sensitivity test.

Growers can run test strips at sowing very easily to compare no fertiliser in the seed row with the rest of the paddock. This is an effective method to see whether the usual fertiliser rate is reducing vigour or plant populations.

With dry autumns and planting into marginal moisture see the negative impact that low soil moisture has in a reducing plant population and reduced vigour is often seen. In seasons with high soil moisture levels at planting crop damage is generally not an issue. Soil moisture has a major impact on the effect of fertilisers in contact with the seed.

The rate of drying can be as important as the initial soil moisture during the germination and establishment phase. If soil moisture levels fall post sowing, the potential for reduced emergence will increase.

Soils with a high proportion of clay are better able to retain water and adsorb ammonia ions released from nitrogen fertilisers than coarse-textured soils. There is a greater risk of seedling damage at any given fertiliser application rate on sandy soils than on heavier clay soils.

The safest application equipment allows the fertiliser and seed to be applied in separate bands. Below and to the side of the plant line with a minimum of 50mm of separation is the most effective method of avoiding seed or root contact in winter crop. Also consider twin row, dutch opener type systems that give excellent flexibility with fertiliser applications. 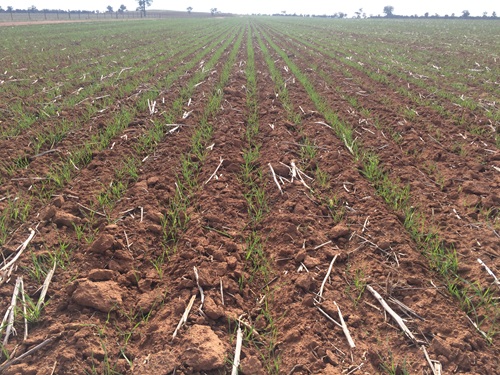 Photo 3: An example of a twin row seeding system with Gregory wheat at Grenfell in 2018.

Any change in the application equipment should be considered for its potential to increase or decrease seed safety, even changes to row spacing. There’s more than one grower out there who has learnt the hard way that increasing the row spacing and keeping fertiliser rates the same can result in reduced plant population. Don’t make this mistake!

The safest way to manage fertiliser application with the seed is to calculate the Seed Bed Utilisation percentage (SBU%) and look up the safe rates tables from Incitec Pivot Fertilisers (see below) and stay at or below the safe rates recommended. The SBU% is a risk analysis tool that can be used to determine the potential for emergence damage. It is calculated as follows:

Safe rates tables are available from Incitec Pivot Fertilisers –  https://www.incitecpivotfertilisers.com.au/~/media/Files/IPF/Documents/Agritopics/SBU.pdf
. The tables allow you to determine safe rates based on the fertiliser type, crop type, soil moisture and soil type. There is also a calculator available on the International Plant Nutrition Institute’s website which offers answers to the safe rate question – http://seed-damage-calculator.herokuapp.com

For more information, feel free to contact me on 0427 006 047 or jim.laycock@incitecpivot.com.au