ENTEC® was introduced to cane growers and advisers in 2014. It’s now widely used to protect against nitrogen losses and give cane crops greater potential for higher yields when the season allows.

ENTEC is sold by accredited advisers who have proven their understanding of the product by satisfactorily completing a training course and assessment. This helps ensure the best practice use of ENTEC for the best possible results in the field. However, many people involved in the wider cane industry – growers, advisers, fertiliser sales people and some plant nutrition researchers – could benefit from the following refresher about the way ENTEC works.

ENTEC is a liquid chemical (3,4 dimethylpyrazole phosphate) that is sprayed on to conventional nitrogen fertilisers at pre-determined rates. ENTEC is described as an ammonium stabiliser or a nitrification inhibitor, but it doesn’t do anything to the nitrogen directly. The active ingredient targets the Nitrosomonas group of bacteria, which are attracted to the ammonium from the fertiliser.

It is the Nitrosomonas bacteria which convert ammonium to nitrate in soils. The Nitrosomonas population builds up quickly when an ammonium food source appears in the soil. Their numbers can double every eight hours.

ENTEC works by binding to a copper atom in the ammonia mono-oxygenase enzyme in the Nitrosomonas bacteria. This blocks the enzyme’s activity and stops the Nitrosomonas bacteria from converting ammonium to nitrite. The result is more ammonium nitrogen in the soil and less nitrate nitrogen, which reduces the potential for leaching, denitrification and runoff losses. It is only nitrate that denitrifies, and nitrate is also prone to leaching and runoff.

ENTEC is active until it is broken down by other soil microbes. The time this takes will depend on soil conditions such as moisture, temperature and bacterial composition. At this stage, the Nitrosomonas are released and can resume their normal activity.

ENTEC can be used in all agricultural soils with a pH(w) of more than 4.5. Below this level, the Nitrosomonas bacteria do not thrive so there will be no effect.

The best practice use of ENTEC urea blends in cane soils involves applying the fertiliser into the soil with at least 10 cm of compacted soil cover. ENTEC does not protect nitrogen from volatilisation losses, so effective incorporation into the soil is essential. In recent times, the StoolZippa® has been useful in helping cane growers to ensure adequate compacted cover over their fertiliser bands and reduce the potential for volatilisation losses. 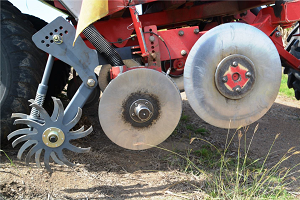 What happens when nitrogen is applied?

Different nitrogen fertilisers behave in different ways in the soil after application, regardless of whether ENTEC is used. For example, when urea is applied to the soil and is exposed to moisture, it converts to ammonium in the presence of a naturally occurring enzyme called urease. The process of dissolving urea creates a localised alkaline reaction which drives the conversion of that ammonium to ammonia.

A band of ammonia is likely to be present in the soil within 24 hours of applying urea or ENTEC urea and concentrations of ammonia may continue to increase over the following week or two. This has its own unique protection against nitrifying bacteria. At a boiling point of -33.4oC, the interior of the fertiliser band is toxic to all life. This ‘soil state’ significantly slows the conversion to nitrate nitrogen!

The ammonia band is also volatile and prone to gaseous losses through the soil and to the air for as long as it persists. This is why it is so important to have adequate soil cover – to prevent any ammonia from moving far enough through the soil that it can escape into the air. Any amounts of ammonia which move from the band into adjacent areas of the soil will also be an attractive food source for nitrifying bacteria such as Nitrosomonas, if they are present.

Of course, the localised alkalinity around the fertiliser band won’t last forever in a dynamic, crop sustaining, cane soil. As the surrounding soil acts to reverse the localised alkalinity, the fertiliser band converts back to ammonium. This may only take hours or a week or two, assuming the surrounding soil has a pH of less than 7. It happens in an ‘onion ring’ style from the outside of the band to the interior of the band.

The situation is different where ammonium containing fertilisers are used, such as EASY N®,  GranAm® or CalGran®. There is no localised alkaline reaction and a band of ammonium will be present in the soil as soon as the soil provides sufficient moisture to start the solubilising process. This is likely to take less than 24 hours with good soil moisture, but it can stretch out to weeks under dry conditions.

At this point, whether it has taken a week or two or just 24 hours, the nitrifying bacteria will move in and rapidly convert the ammonium to nitrate nitrogen. In a real-life cropping situation, even if some soil bacteria populations have been diminished in the centre of an ammonia band, most of the soil will still provide a healthy home for bacterial life and recolonisation. The populations quickly build up, move in and consume the ammonium.

Where ENTEC has been applied with the fertiliser, it blocks the activity of the Nitrosomonas bacteria, allowing the nitrogen to remain in the ammonium form for extended durations.

Whether this affects the total availability of nitrogen and the performance of the cane crop will depend on seasonal conditions. For example, if there is a storm or even a few days of heavy rain while there is a large pool of nitrate nitrogen in the soil, this nitrogen may be lost through leaching, denitrification or runoff. This reduction in the overall supply of nitrogen to the crop may impact on crop growth and yield.

Denitrification can occur whenever nitrate nitrogen is present in the soil and the soil’s pore spaces fill with water. Under these limited oxygen conditions, soil microbes can use nitrate as an oxygen source resulting in the release of nitrous oxide gas initially, and then di-nitrogen gas from the soil.

Denitrification and leaching events can occur whenever the conditions are right, and this is often multiple times in one season. Losses can occur due to prolonged wet weather, a single major rain event, or even unexpected rainfall after irrigation.

This means that ENTEC does not delay the availability of nitrogen to the crop. It simply allows the nitrogen to stay in the ammonium form for longer. The crop can take up ammonium nitrogen whenever the conditions are right for growth.

How long will it be effective?

Every ENTEC application is unique, so how long ENTEC is active in the soil is likely to be different each time it is used. The soil will have different chemical, oxygen and bacterial compositions each time. It will be wet and dry and warm and cool at different times and for different durations.

As a guide, ENTEC will continue to be active for longer where there is less biological activity, such as in dry soils. In wetter conditions and in warmer soils (25oC), it may be as little as four  to six weeks before the stabilising effect of ENTEC wears off. However, the protection offered during this time may still be valuable given that this period is likely to involve both rapid crop growth and significant potential for losses.

In experiments, researchers assess whether ENTEC is still active in the soil by testing for both ammonium and nitrate at different times and comparing treatments. Higher ammonium levels and lower nitrate levels generally indicate the ENTEC is still active. A recent field experiment conducted at the University of Queensland looked at the performance of banded enhanced efficiency fertilisers. The level of ammonium in the ENTEC treated area was 300% higher than the standard urea treated area after 34 days, 291% higher after 49 days and 1076% higher after 71 days2.

In the end, it only takes a single downpour at the wrong time to upset nitrogen management in cane. No matter what happens after applying nitrogen fertiliser in cane, it is better as ammonium. This is ENTEC’s advantage – keeping more nitrogen as ammonium for longer.

For more information on using ENTEC in cane systems, or to discuss any aspect of this article in more detail, please contact me by email at rob.dwyer@incitecpivot.com.au or 0428 111 471.